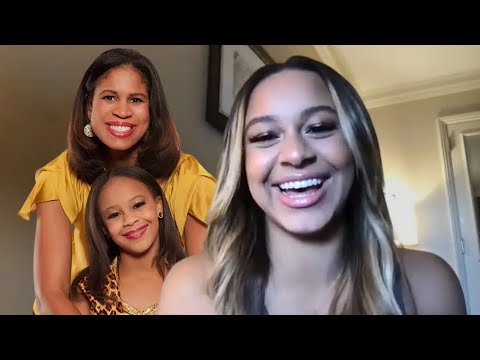 Entertainment Tonight
Share on Facebook
Share on Twitter
Share on Pinterest
Share on LinkedIn
Nia Sioux opens up to ET’s Deidre Behar ahead of her Facebook x Brat TV series, ‘Dance With Nia,’ premiering June 4 on Facebook and Instagram. The 19-year-old triple threat gets candid about her new series, which aims to empower and uplift viewers through Nia’s passion for dance and giving back. The ‘Bold and the Beautiful’ star opens up about life as a full time college student at UCLA, studying American literature. She shares her dreams and goals as an entertainer, and reveals she aspires to one day reach EGOT-status. In Nia’s personal life, she explains why she’s content being single. She also reflects on her time as a reality star on ‘Dance Moms,’ where she and her mom, Dr. Holly Hatcher-Frazier, appeared for seven seasons. Nia explains that even though being on the show was challenging at times, she’s grateful for the platform it gave her today. Despite the tough experience, Nia also reveals why she didn’t quit the show. While Nia says she’s not interested in doing a reunion with the moms and her former dance instructor, Abby Lee Miller, she confirms she’s still very close friends with her fellow dancers. Nia specifically mentions keeping in close touch with Chloe Lukasiak, Maddie Ziegler, Kenzie Ziegler and Brooke Hyland. With the 10-year anniversary of the reality series approaching in July, Nia takes a trip down memory lane to share her favorite and least favorite moments.
Share on Facebook
Share on Twitter
Share on Pinterest
Share on LinkedIn